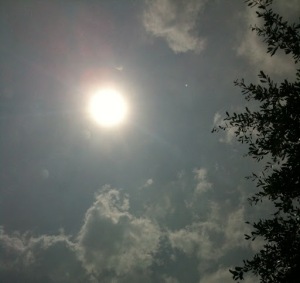 The summer heat in Texas is”hotter than Hades” (as my grandmother used to say).

In the first week of July, when I realized my downstairs A/C wasn’t blowing cool air anymore, I breathed a sweaty sigh of relief as I pulled out my membership card to the home warranty company.

With home warranties, home owners like me pay between $500-600 a year for the opportunity to have support for major appliances like the refrigerator, stove, disposal — or A/C going out on you in the course of a calendar year.

I like the idea that, if something fritzes out on me unexpectedly, I can pay roughly $60 to the contractor they send, and I am back in business. Earlier this year, I had to have the garbage disposal replaced, and it was a breeze.  I called.  The home warranty company sent a contractor who came and replaced the unit in one visit.  Piece of cake.

But, when it was the A/C that went out, it was not so easy. I called, and they sent a contractor. My A/C condenser is actually on the roof, and I found it strange that the guy didn’t bring a ladder or even attempt to check it out. He looked at the inside equipment of my system (in the ceiling of my kitchen), rambled off jargon and said that they would need to send someone back to replace parts…

Days went by and I didn’t hear from anyone. In the meantime, we had triple digit temperatures outside, and I had no A/C.  So, I called and inquired. They told me that the claim was denied due to a previously existing bad installation and that their records showed they had informed me of this. This wasn’t the case.

I escalated the issue, explaining that when I moved into the condo just over a year ago, it was fully inspected before I bought it — including the A/C units — and everything was up to code and in perfect working order. They agreed to send out a second contractor. Then more days go by. No calls from the contractor or the home warranty company. This repeated for weeks. After nearly a month with no A/C, I realized I was going to have to get proactive.

I organized my own “counter system,” which involved daily calls and, finally, mentioning my attorney. And, just when things seemed to move again, they stalled because they said they were waiting on the part. I ended up waiting two more weeks for equipment that’s available at any number of DIY stores within walking distance.

The home warranty company ended up covering all but roughly $500 of the contractor’s fees. But, it was so much work to get them to honor my contract, that I wondered if the inconvenience was by design — so I would give up on them and they wouldn’t have to cover the few thousand dollars a full price job would have cost me.

I have no idea if this kind of experience is typical, but I really hope not.

I guess this was a really frustrating lesson learned. Looking back, I realize I should have filed a complaint with the Better Business Bureau. But, even though this was a royal pain to resolve, I’m glad I didn’t give up.

Now I can chill out…